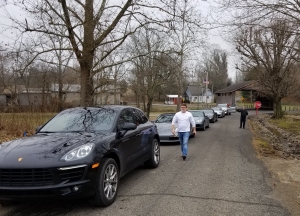 For car and motorsports enthusiasts, Louisville seems to be in the center of the world. Putnam Park is 2.5 hours away; Mid-Ohio, 6 hours, Road America, 9. But, for the true enthusiast, the best destination might be Barber Motorsports Museum and road course. 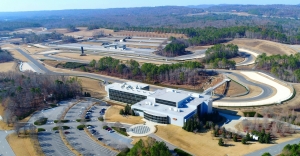 In the 1960s George Barber’s zeal for speed ignited his vision for today’s museum. Having raced Porsches in the 1960s, Barber held an impressive track record—63 first place wins. A thriving business executive, Barber rediscovered his motorsports passion in 1988 and began collecting and restoring classic cars.

Since the world’s best and largest car collections had already been established, Barber heeded some wise advice. His longtime friend Dave Hooper—a motorcycle enthusiast as well as the person who ran Barber’s delivery fleet for 27 years—suggested that Barber shift his focus from cars to motorcycles. Being a man of big dreams, Barber seized the opportunity to accomplish what no one else had done… build the world’s “best and largest” motorcycle collection. 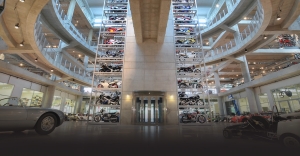 To help jumpstart Barber’s collection, Hooper suggested a trio of Honda V-Fours. He then gifted Barber with two of his own motorcycles. One of these bikes—a rare, exquisitely detailed 1952 Victoria Bergmeister—instantly won Barber’s affection. The quest for more was on. In 1994, the Bergmeister inspired Barber. He appreciated motorcycles for much more than just fast machines. They were also works of art.

He established the Barber Vintage Motorsports Museum as a 501(c)3 non-profit foundation. The museum opened to the public at its original Southside Birmingham location in 1995. Along the way, Barber’s love for speed was not forgotten. The Barber staff excelled in conserving or restoring motorcycles to running condition, and, in some cases, to competition-ready shape. Having launched a race program to promote the collection, Barber also demonstrated to the world that this was a “living museum.”

The Barber Racing Team first competed in the American Historic Racing Motorcycle Association (AHRMA) series in 1992 in Daytona. The previously unknown team won premier races and created a buzz in the vintage motorcycle community. The team continued competing in the U.S. and Europe until 1998, bringing seven national championships back home to Birmingham.

A call from New York’s Guggenheim Museum in 1997 was a defining moment for the Barber Museum. Sending 21 bikes to exhibit at the original New York show, “The Art of the Motorcycle,” Barber continued to make the connection between motorsports and art. “The Art of the Motorcycle” exhibit also traveled to Chicago and Bilbao, Spain. The thrill of the New York exhibit sparked a much bigger dream for Barber. “We can do this in Birmingham!” he maintained. Barber set out to create a one-of-a-kind, world-class facility. Going even further, he imagined a road course as well where the “living museum” quality of the collection could be demonstrated.

A sprawling Birmingham landscape was required to accommodate the large scale of Barber’s dream. Consulting with world champion racers John Surtees and Dan Gurney, uncommon precision drove the design of the complex. In September 2003, the 930-acre park, with its world-class 16-turn, 2.38 mile racetrack, opened to the public. The track is home to the Porsche Sport Driving School, and numerous automakers have chosen the park as their stage for vehicle debuts and to film commercials. In 2014, the Barber Proving Grounds were built adjacent to the racetrack and consist of a track area, which can be converted to various layouts, along with a wet/dry skidpad. The proving grounds allow users to demonstrate vehicle capabilities such as accident avoidance, braking, turning, and acceleration. Mercedes Benz began using the grounds for their employees’ “Brand Immersion Experience” in October. Other uses for the proving grounds include product debuts, kart racing, driving schools, and safety instruction.

Today, the museum is home to over 1,400 motorcycles that span over 100 years of production. More than 650 bikes can be seen on any given day, and 200 different manufacturers from 20 countries are represented in the collection—from Harley-Davidson, Honda, and Indian—to Showa, DSK, and Cagiva. The museum features the world’s most extensive Lotus collection, anchored by the Lotus 21. The museum also displays rare racecars, including the 1964 Ferrari F-158, in which John Surtees won the 1964 Formula 1 Driver’s World Championship. 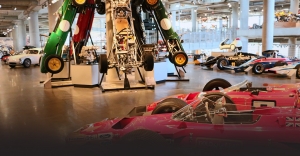 A number of us journey down to Birmingham for track events. The track being the site for a number HPDEs, plus other DE type events sponsored by independent promoters. The track is fast, with a couple of long straights, elevation changes and well-maintained surface. One danger, if you hit a barrier, a truck will be out to retrieve your car in minutes, along with a bill for replacing and repainting the barriers. George is serious about maintaining the track. 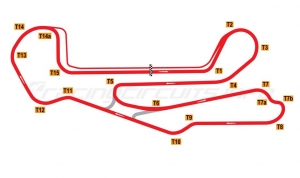 The setting is in rolling hills a few miles outside of Birmingham with woods and two bridges crossing the track from the museum into the woods. Periodically through the year, besides professional racing (Honda Indy Grand Prix of Alabama, part of the IndyCar Series, is one of the annual events at the park) there are annual events such as the Barber Vintage Festival, the Small Bore Festival and more.

Come for a DE, come to visit the museum, come for a weekend of racing…but come. You’ll be amazed at what you find, and it’s only seven hours from Louisville.

We don’t get to drive much for fun in Kentucky November to February: too cold, wet and dreary. We make up for it when the weather turns and May was a typical example.

We started the month with the 4th Annual Wine and Steak tasting at the home of Joe and Jane Galownia. 60 members came with two bottles of wine: one to share and one to auction off to members at the event end. As usual, Joe and Jane were delightful hosts. Members were greeted with a terrific spread of charcuterie and a selection of cheeses (including member Kenny Mattingly Kenny’s Farmhouse Cheese) followed by a dinner of grilled steaks, oven roast potatoes and salad. Desert was a selection of fine cakes and pies (gotta love that coconut cream cake!).

The monthly membership meeting was held at Mango’s Mexican Restaurant. Our membership attendance numbers keep climbing to such an extent it’s getting harder and harder to find someplace to accommodate all of us. I guess we should be happy we’re so successful! Nothing succeeds like success.

The next weekend, Region leadership Jason Miller (President), Robert Klein (VP), Anthony Minstein (Membership Chair) and Jim Doll and Gene Hoffman (Board Members) drove up to Mid-Ohio Sports Car Course for the Northern New Jersey Region experienced driver weekend. It’s always nice to see how other regions run their DEs and a great time was had by all, in spite of the low temps and damp track.

The same weekend, another group made the 100 mile trip South to member Ken Mattingly Kenny’s Farm to tour the new automated barns (robot milking stations for the cows!) and of course, to buy some of Kenny’s locally famous cheese. Unfortunately, the weather did not cooperate for the drive; rain, slick roads and cold temps tried to damp the enthusiasm, unsuccessfully. 11 cars and 20 members braved the elements returning with lots of fresh cheese (Kenny always brings a good assortment of cheeses for tasting at our own track event).

To round the month off, we had a Memorial Day weekend drive through the Ohio River valley out to Georgetown, KY to visit Babe’s BBQ. TH Morris, our Activity Chair led 16 cars (on Memorial Day weekend!) us on a long drive across the twisty county roads along the many streams and rivers. A favorite was the path following the Kentucky River curving past the river locks and dams outside of Lockport, KY then crossing Appalachian the foothill ridges normal to this part of the state. Babe’s is an off-the-trail family dining spot on the list of Kentucky 10 best off-the-beaten-path restaurants and the service and home cooking demonstrated why. Everything from the warm greeting, to the great service and food impressed our group of travelers.

I’m not sure what we liked more: the drive? Or, the BBQ? Typical KY staples like pork, brisket, chicken, and Kentucky specialty sides including corn pudding and fried okra (yee haw!) plus traditional side dishes like cole slaw, beans and corn bread (and did I mention the toasted coconut pie?). The ride ended at Babe’s with many members opting the more direct freeway route home. 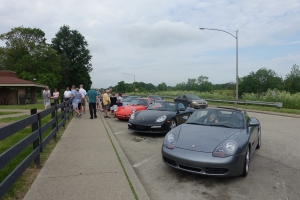 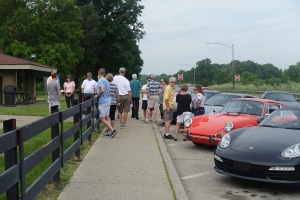 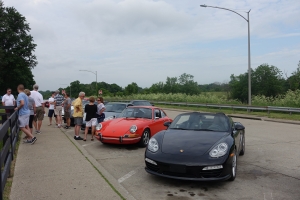 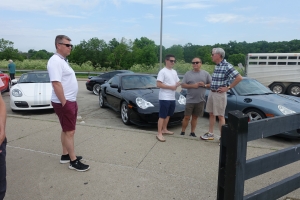 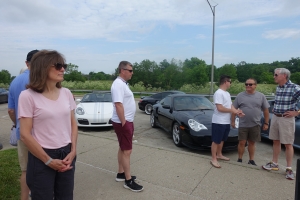 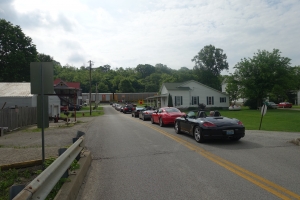 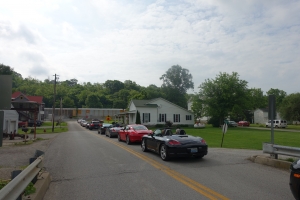 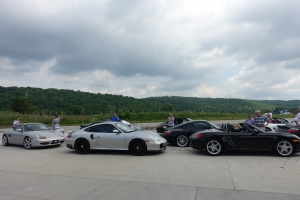 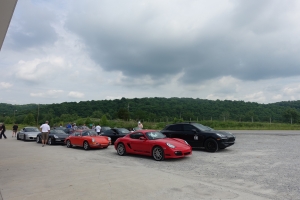 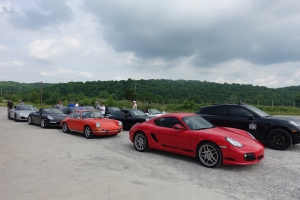 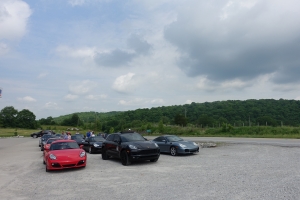 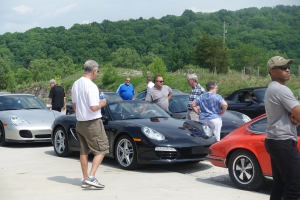 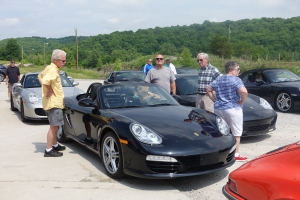 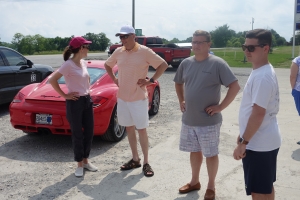 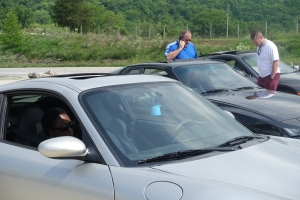 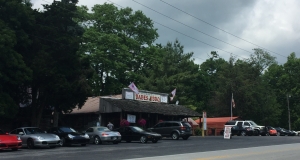