November 1959 the petition was accepted. Our first officers were Maj. Frank Beckett as President, Dr. Jack Chumley as Vice President, and Dr. Robert Lykins as Secretary and Treasurer, they might also been the 1960 officers. The Kentucky Club territory was all of Kentucky, 18 counties in Southern Indiana, and 11 counties in Southern Ohio. The early members were very active with local and national activities, I have photos from members at the 1960 and 1961 Porsche Parades.

In 1962 the Kentucky Club fell into a period of inactivity, which lasted until 1964. In November 1964 Edward Hessel took interest in revitalizing the Kentucky Region. On December 3, 1965, the first meeting was held and a committee was appointed to write the Bylaws, the following photo invitation to elect officers was sent out to Porsche owners in the Kentucky Region.

The meeting was held and Edward Hessel was elected as our 1966 President, Arthur Blair as Vice President, William Heil as Treasurer, and Marilyn Sommer as Secretary. For many years it was thought that the Kentucky Region began in 1966 Charter 1966, the only charter we have was granted to the Kentucky Region and dated November 1966. From the Treasurers journal the Kentucky Region started with 28 members on January 26, 1966. The 1966 Kentucky Region territory was very similar to the original 1959, except for the counties in Ohio and several nearby Kentucky counties that were surrendered to the Ohio Valley Region founded in 1961. 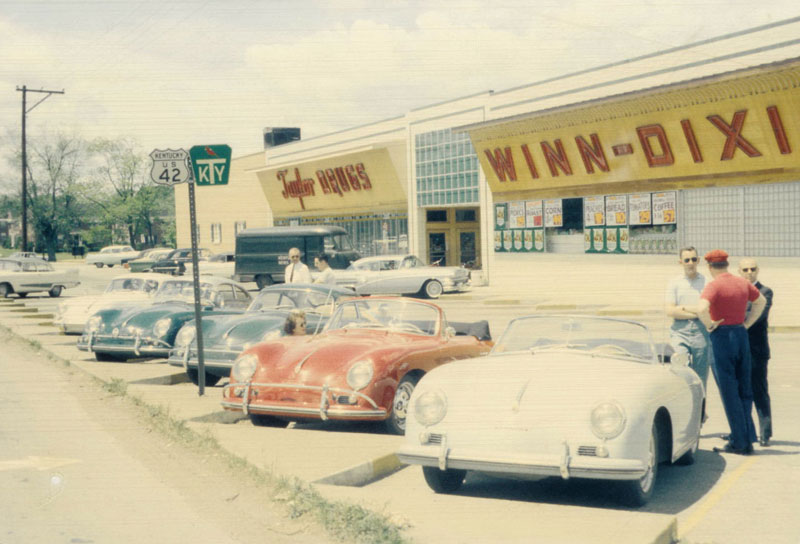 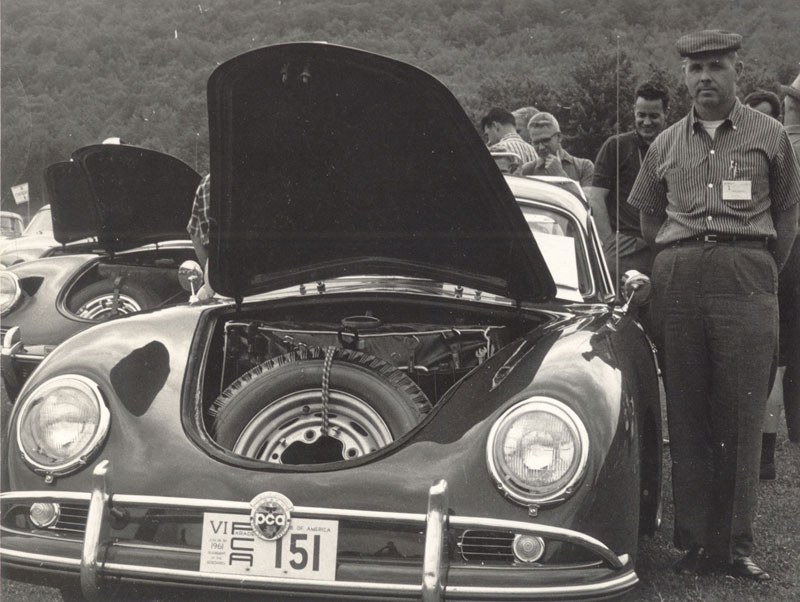 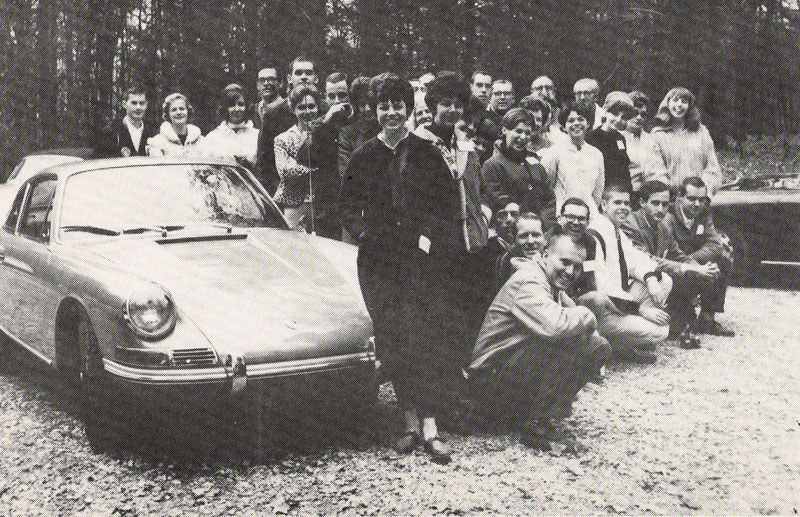 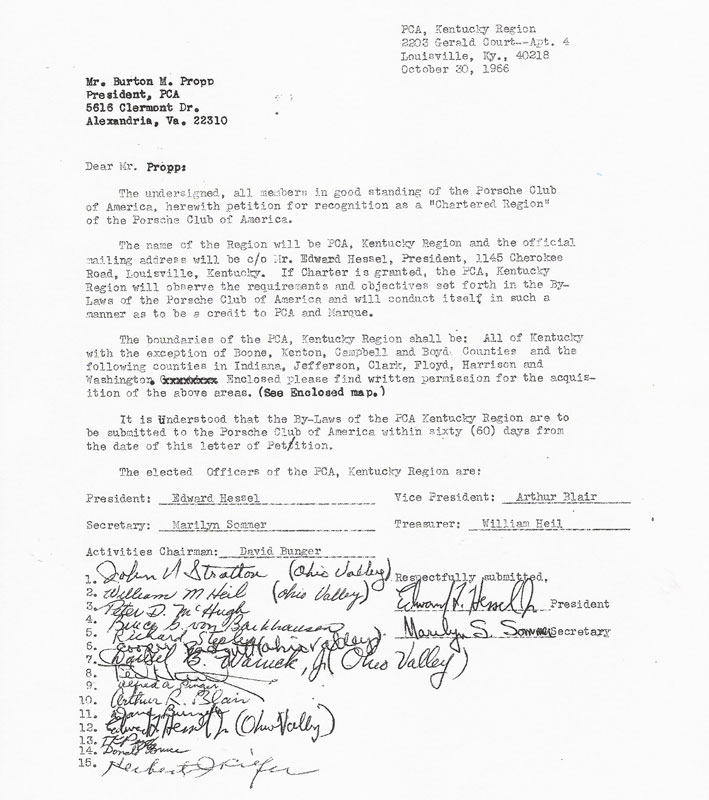 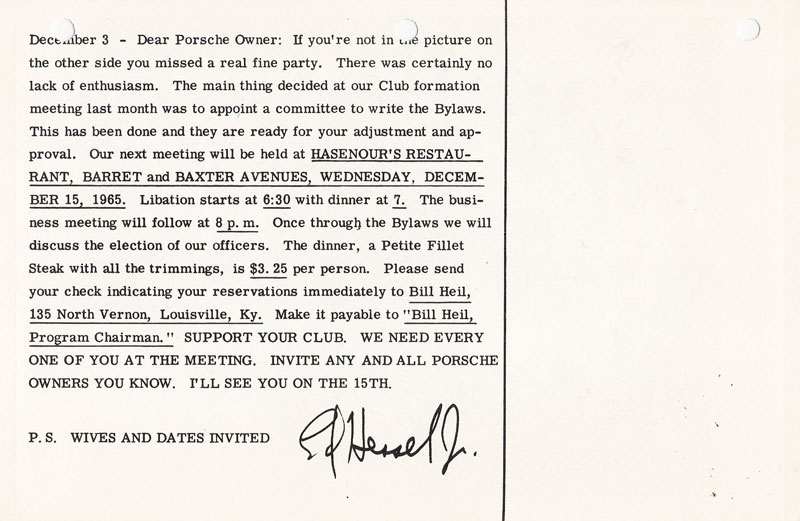 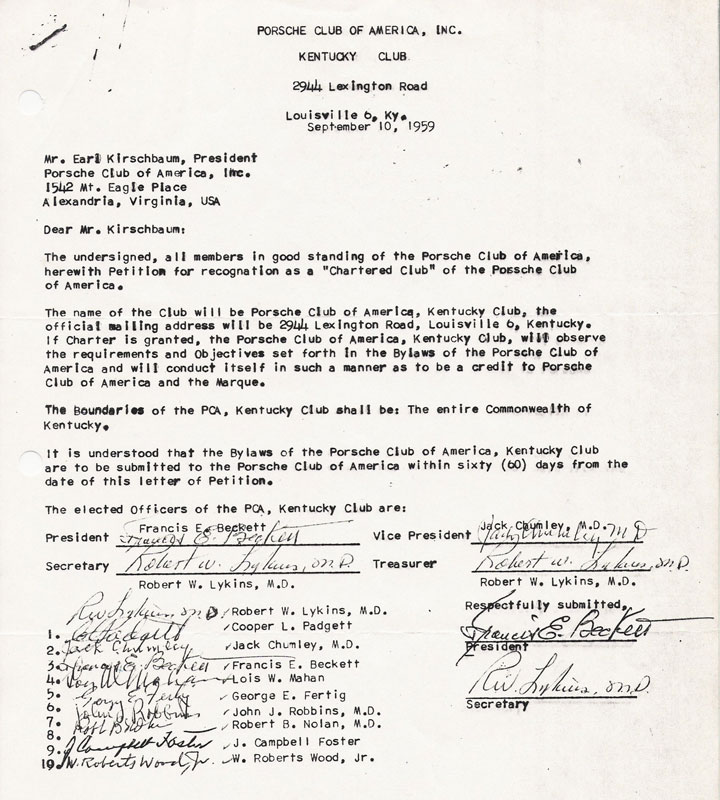 Maj. Francis (Frank) Beckett, our founder, was also one of the original 13 founding members of the Porsche Club of America in 1955. While stationed in Germany in the early 1950’s his lifelong passion with Porsche began. When he was transferred to Fort Belvoir in 1954 he brought back with him a new 1954 356, where he crossed paths with Bill Sholar. One year later they had formed the Porsche Club of America (see Pano article below for more information on Frank Beckett and Bill Sholar).

In 1958 Frank Beckett was transferred to Ft Knox and founded the Kentucky Region.Photo courtesy of Dr Robert Nolan family, 1960-61 In 1961 he was transferred to France and then to Kaiserslautern, Germany. In 1963 Lt Col. Frank Beckett founded the Germany Region. In 1964 he was briefly transferred back to the states before heading out to Vietnam for a year long tour of duty. Returning from Vietnam, he was stationed at Ft Belvoir VA and retired in late 1965. In 1966 Frank Beckett moved to Winter Park, FL, taking a civilian job with TWA working at Cape Canaveral. He was one of the founders of the Cape Canaveral Region (currently known as Space Coast Region) in 1968. Over the years Frank Beckett owned 11 Porsches from the early 1950’s until 1975, Frank passed away in 1977. 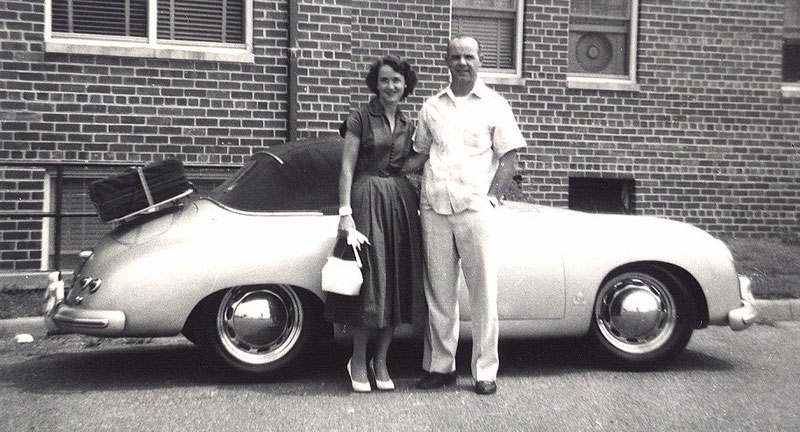 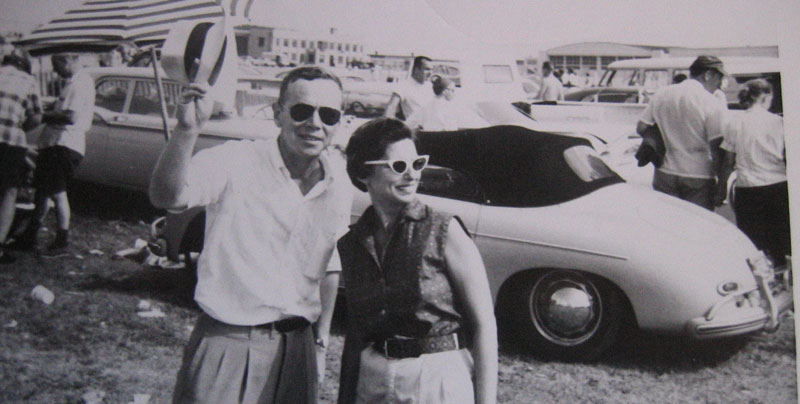 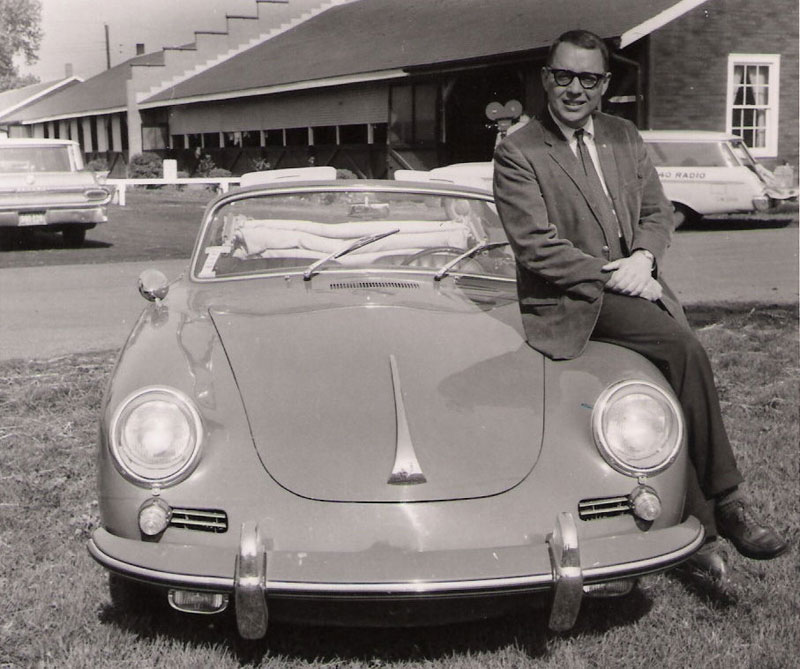 Edward Hessel’s fondness for automobiles began early in life, but in 1953 whileCol. Edward Hessel, Jr. stationed in Iceland his interest switched to European cars. Returning to the States from Iceland Edward brought back a 1953 MG TF, in 1955 he purchased an MGA and in 1957 an Austin Healey 100-6. With one child and another on the way, Edward began looking for a sports car with rear seats. In 1964 he purchased a 1963 356 cabriolet. In late 1964 Edward began checking into re-activating the Kentucky Region. Edward found the Porsche he loved early on and owned and drove that car until he passed in 2001

Bill Sholar was a commercial artist in the Washington, D.C. area in the early 1950s. He also was an admirer of well designed automobiles, and thus purchased his first Porsche, a 1953 356 Coupe. As time passed, Bill met other Porsches on the road, always blinking his headlights in silent greeting. By late 1954, Bill was convinced that a more personal meeting would be appropriate with other Porsche owners to discuss the positive and, the well, ah, not-so-positive aspects of driving the infrequently encountered marque. Following a first gathering February 8, 1955 at the Sholar house, several Porsche owners occasionally got together that spring and summer to share knowledge about the unique cars they drove. Eventually they decided to start a club.

A brief paragraph in the August 1955 issue of Sports Car Illustrated informed readers that a Porsche club was being formed in the United States; all inquiries were directed to Bill Sholar’s attention. Additionally, the Porsche factory was petitioned for recognition of the proposed club. Unofficially referring to themselves as “the gripe group”, they officially titled the new organization the Porsche Club of America, and held their first business meeting on September 13, 1955, at Blackie’s Grille in Washington, DC. Thirteen prospective members showed up, but one had to reluctantly be asked to leave when she revealed that she owned not a Porsche, but a Volkswagen, which didn’t qualify under the Club bylaws, which remain in effect today.

Those in attendance at that first meeting were Bill Sholar, Karl Grimm, Peter Pearman, Ken Twigg, Frank Beckett, Gamble Mann, Fred Schulenburg, Bob Flick, Bob Elliott, Ray Pitts, Harvey Brown, and Don Carr. Sholar was elected President and a press release was sent to the factory magazine, Christophorus, introducing the Porsche Club of America to other Porsche enthusiasts. Word spread, and the 189 Porsche drivers who joined by January 31, 1956 were designated as “charter members” of the Porsche Club of America.

As more and more members joined outside the Washington, DC area, Regions were formed in other communities. The original Washington, DC group eventually became Potomac Region, which remained the hub of activities. First appearing in December 1955, the Club’s monthly magazine Porsche Panorama, kept all members, nearby and remote, appraised of the latest technical information, factory news and events planned. 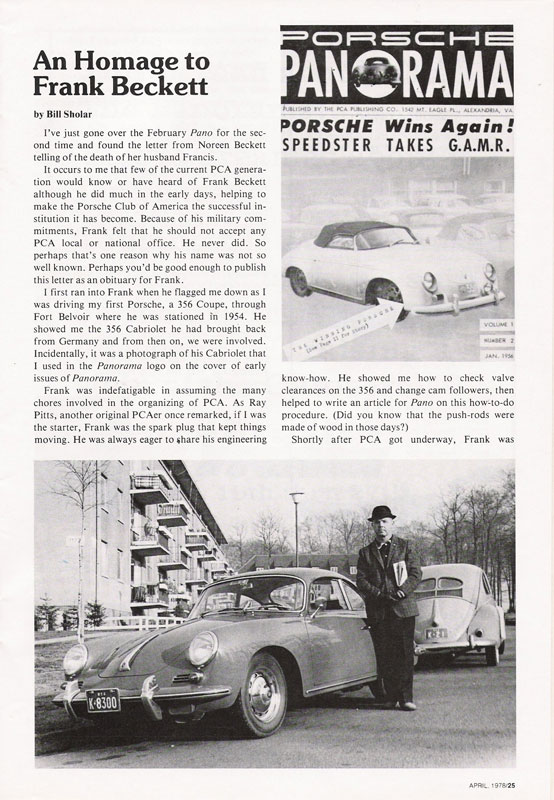 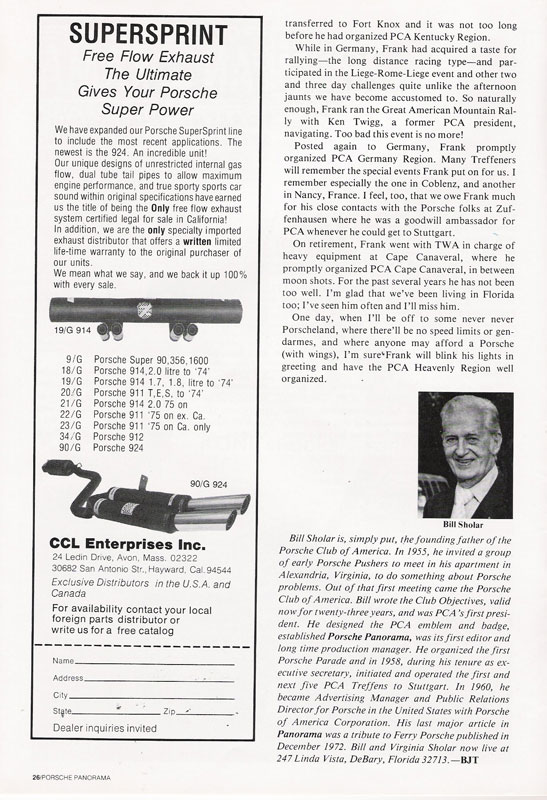